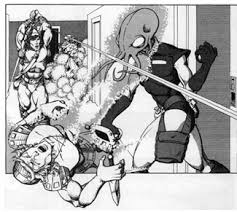 
I might be having an early night tonight 4 dead so far.. One word Grenade in Judge Dredd voice.. So it looks like I'll be home for nine pm

They lowered a rope & ran smack into two warring factions of Veggie Pygmies. The cleric bought it with 13 blow gun darts to the chest. They've had a running battle with the things for 20 minutes now & the dice are flying. 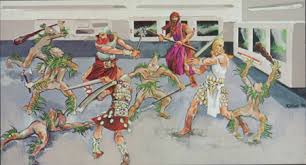 We're now about 39 minutes into the game & the dwarven fighter was nearly scorched by ray gun fire from a roving security bot.
The Dwarf burned by ray gun fire now by a second security robot..
The Party finds some very strange artifacts & the wizard has started to examine them. Rolls are failing here & this is another type of  GRENADE!
Frag Grenade goes off & the party learns about Eggs of Death
A medic lab & hospital with plague victim remains what could possibly go wrong? Well it seems their not all dead! "We'll loot the bodies!"


Oh your going to stick undead in here!?!
Umm no actually the living are far more deadly & you can't turn the living!

"This just keeps going from bad to worse" " I say we take the treasure & bug out!"


And yet their goin' down to the second level.

Robot NPCs can kill your PCs or worse turn them into pasta with lots options on how they do it. 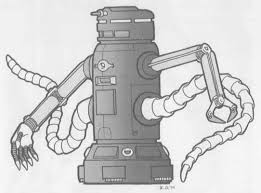 Basically we ended with them exploring the second level & finding a med lab with a robot! Players didn't like the veggie pygmies nor the wolf in sheep's clothing. Especially because I changed the rabbit to an alien mammal 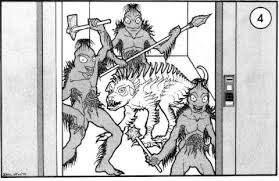 Stopping game in 1 hour for this! I've got two retired engineers playing in this group as well as vets

Thanks Space X for a cool cap for a successful game!
More coming next week!
Posted by Needles at 9:24 PM