'Catacombs of Death'  is a sort of rare beast of a high level  adventure from Dragon's foot by author RC Pinnell because of the upper level of the PC's needed and the deadliness of the adventure.
The plot is something straight out of the pages of an old Dragon or Dungeon magazine in a good way, its got all of that hard core wilderness/ and dungeon action surrounding a nice plot of sword and sorcery action. But this one is an upper level crawl and lives up to its premise in spades; "An old friend requires your help to rid themselves of a curse, but can you survive the Catacombs of Death. An Expert-Companion adventure for character levels 12-15." 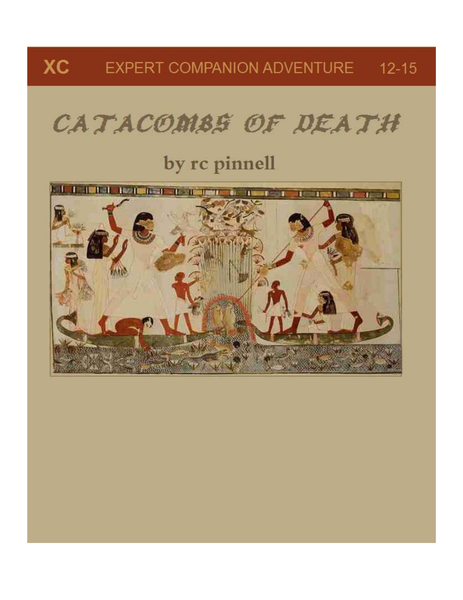 Grab it Free Right Over
HERE
The author lays out the ground work for 'Catacombs of Death' straight out of the gate.


This adventure is designed for characters at the upper range of the "Expert" levels of play--12 to 14. Players running demi-human types should have attained at least Attack Rank C, as provided in the Companion Manual of instructions, that their characters may be able to experience the adventure on a more or less equal footing with the human types.
This is not an open sand box style of adventure instead this is a carefully plotted adventure that follows PC's into the mid range of character development and the pit falls that go along with later life of such characters.
The encounters are a challenge for these characters and the adventure centers around several locations of very dangerous aspect and a rather nasty dungeon.
Action, NPC's, and plot are interwoven throughout the Catacombs of Death, the author making no secret of the lethality and challenge of its plot and story line. This isn't an adventure location but a set of interwoven plots in the style of the older adventures for Basic D&D and retroclone systems.
Think of this module in terms of the Expert module such as the Slave Lord series because there is a very similar vibe running throughout the adventure, a set of circumstances that will haunt the characters for years to come surrounding events already set into motion.
This is an adventure about old vendettas, ancient history, and hair trigger circumstance all putting the PC's at the center of its Egyptian style setting adventure & campaign style  material.
There is a ton of new monsters, set pieces and more right between the pages of this one. It really is a well done but upper level adventure & used well can propel characters into a whole other realm of character back story and development. But those playing this one are going to be changed forever by what happens out in the sands in the Catacombs of Death. Take a look and download this one.
Using Catacombs Of Death
For Your Old School Campaigns
Using 'Catacombs of Death' for your Old School Retroclones is going to require a bit more of a challenge because of the very nature of the module, this isn't a sandbox or kitchen sink adventure but one that requires some preparation and careful thought by the DM.
Because of the very nature of its story and plot a careful working by the DM is needed. A nice idea is to work the events from the back drop into the PC's career early into a campaign and then use Catacombs as a send off or mid range adventure for upper level characters.
That being said there are other ways of dealing with the circumstances surrounding the adventure. 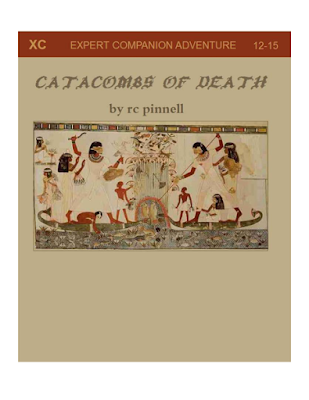 Another idea is to have another high level  rival party hook up with the adventurers and one of their number set the plot and events of 'Catacombs of Death' into motion. This adventure is interesting, complex, and full of adventure and surprises. There are a myriad of uses for it but for a game such as Astonishing Swordsmen and Sorcerers of Hyperborea some real solid adjustments of level and a handful of solid conversion work needs to be done by the DM. The material will fit a such a game but it would require some work on the DM's part.


This is a module well worth the time, energy, and circumstance to take a look at and its very well done. For a free module is blurs the line once again between fan and pro. I personally think that 'Catacombs of Death' is worth your time to down load & a solid addition to any DM's adventure backlog of modules.
Posted by Needles at 11:23 PM