"Temelpa, an ancient walled city on a forgotten trade route, thought to be abandoned ages ago, and now, the adventurers find themselves besieged within.
Unable to leave their refuge, the adventurers will quickly discover the city is inhabited, not deserted as initially believed, by an ancient society. They will soon be embroiled in the affairs of a twisted caste system built on servitude and cannibalism and headed by an inter-dimensional vampiric overlord.
This open-ended adventure allows the GM to unleash an array of unique monsters, factional power struggles, and intriguing plots upon the characters as they fight and scheme to stay alive, entrapped in a hostile city where they are viewed as useful pawns or a tasty exotic meal.
Can the characters hold out until the siege is broken and escape with their lives? Will they champion the cause of the downtrodden and upend the social order? Or will they be the main course for the next cannibalistic feast?
Welcome to the City!" 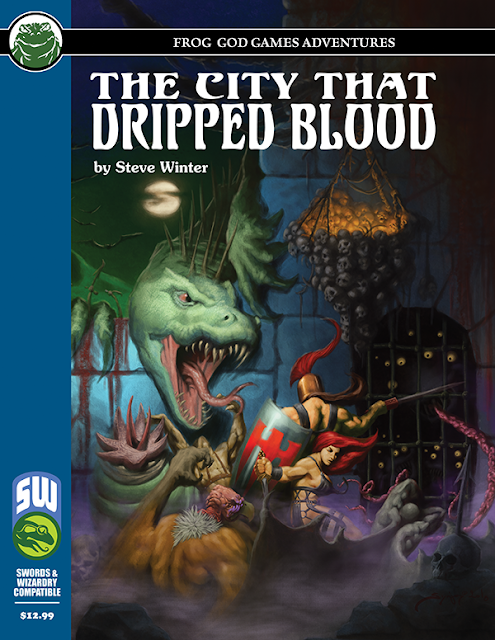 So I was looking for a good Sword & Sorcery adventure that I could port over to my OSR campaigns. Last night I came across 'The City That Dripped Blood' by Steve Winter  for  the Swords & Wizardry retroclone but easily adaptable to other OSR systems. This adventure could be completely ported over to Astonishing Swordsmen & Sorcerers of Hyperborea or Castles & Crusades.
This is a short but solid adventure clocking in at twenty three pages of factional blood chilling terror. The dungeon master is going to have to be careful not to wipe the party out! Pay attention to the level cap on the adventure because your going to need five & above level adventurers to handle the Sword & Sorcery come down that echoes in on your players.
The wise dungeon master would look to John Carpenter's Assault on Precinct Thirteen for inspiration for running 'The City That Dripped Blood'. The PC's are going to get involved in the factional wars of the city of Temelpa. Extraplanar vulture-men  skelzis became vampiric with the help of the magical blood orchid of the area. With the help of their weredactyl servants rule over the forgotten desert city of Temelpa. The human resistance is in dire need of adventurers & the party can get themselves into deep trouble ala  John Carpenter's Assault on Precinct Thirteen


'The City That Dripped Blood' could become a tight & deadly campaign starter with the right group of players. The DM can adjust the monster action & encounters in  Temelpa as they need it. The whole of  cloth of the NPC inter-dimensional vampiric overlord could be used as a reaccuring threat to the party for a mini campaign for quite sometime. 'The City That Dripped Blood' by Steve Winter feels like a good & solid effort by Frog God games. The whole affair & cloth of 'The City That Dripped Blood' by Steve Winter  feels like a great starter for a long term campaign. And this is where I think its strength lies. The cartography & writing are snappy, the zip along & get the adventurers into the thick of the affair of violence & black magic horror  in in Temelpa.
For Astonishing Swordsmen & Sorcerers of Hyperborea this is the perfect adventure to continue on right after the events of 'The Anthropophagi of Xambaala' by Corey R. Walden. The PC's start in Xambaala. The events of 'The Anthropophagi of Xambaala' unfold & then the PC's  embroil themselves into 'The City That Dripped Blood'.
"Furtive and odious tales circle through various Hyperborean ports of call. Rumours whisper of an ancient occult city, Xambaala, clinging to the edge of the Zakath Desert. Perhaps the hideous horrors said to assail the city in the darkest hours are exaggerated. Maybe too another explanation can be found for the foreigners who are said to have disappeared to some uncanny fate. But the whispering tongues also hint that gold glints in the shadows of Xambaala, ready to be taken by the bold." 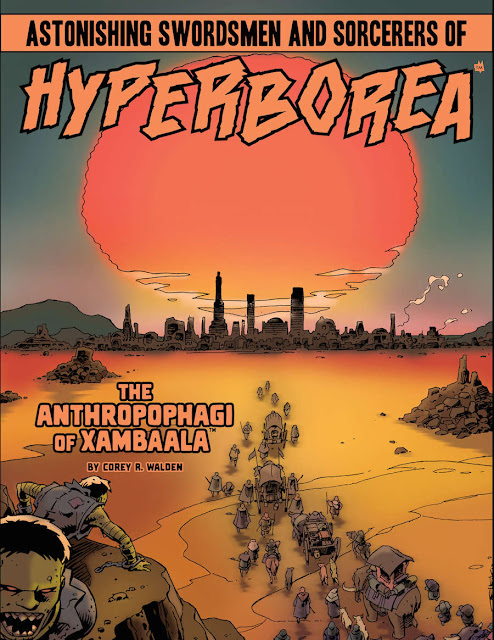 'The City That Dripped Blood' by Steve Winter  is available right here.
Posted by Needles at 9:53 AM