Commentary On The Ascendant Super Powered Kickstarter From Autarch Games 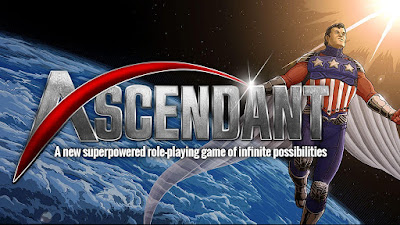 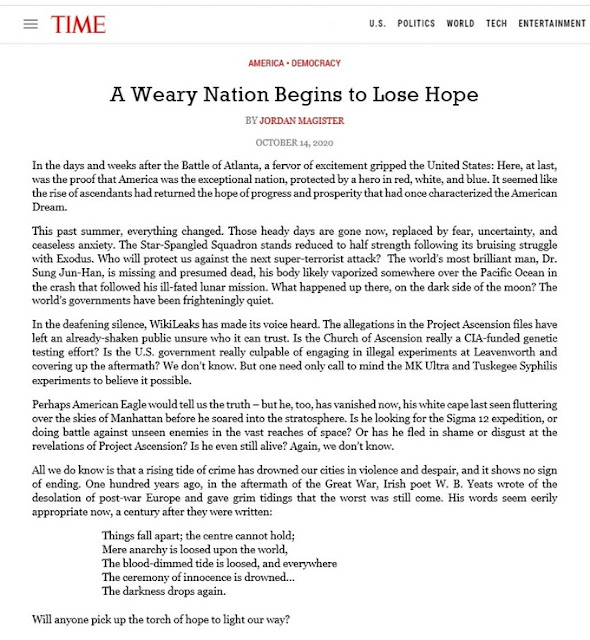 "The world of Ascendant  doesn't begin to diverge from that of our real world until 2012, and the first superheroes don't go public until the Battle of Atlanta in 2018, meaning your player characters will be among the first superhumans to ever don tights and fight crime.  The setting is presented as an epistolary novel made up of leaked documents, transcripts, newspaper clippings, and emails that you can print out"

The world of 2020 Ascendant rpg is not that far removed from ours but with some very dangerous additions. The advent of super heroes & villains has led to a total imbalance in the world of Western & Eastern society. The setting of the Ascendant rpg is not simply on the razor's edge it is the razor's edge & its working its way to cut across the throat of the Earth.
Ascendant takes the rabid mathmatics of D.C. Heroes & combines it with the mathematics TSR classic Marvel Super Heroes by taking it one step beyond. This game takes the material & mathematical system  echos &  algorithms of these classic rpg's & then brings them into focus for 2020. 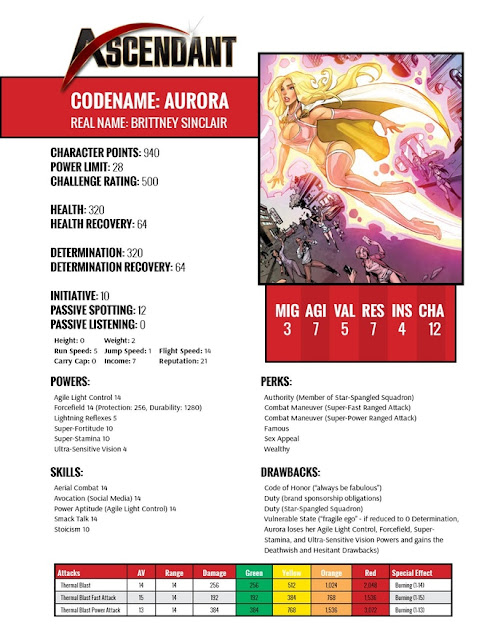 What do I mean by this?! Well look at the hero example presented in the Kickstarter ;


"Up at the top you can see Aurora's Character Points, Power Limit, and Challenge Rating. Character Points (CP) are used to construct characters. An average human has 200 CP. A trained soldier has 240 CP. An exceptionally impressive, formidable and renowned human in the real world has 400 CP.  Every 80 CP represents an approximate doubling of the character’s competency across all capabilities. With 940 Character Points, Aurora is one of the 20 most powerful superhumans in the world. Power Limit constrains how  characters can allocate their CP and is analogous to class level in a D20 RPG. Challenge Rating shows how powerful a character is relative to a trained soldier. Aurora can defeat 500 US infantry simultaneously - she's a tough woman.
Over on the right, below her image, you'll see Aurora's Primary Attributes: Might (MIG), Agility (AGI), Valor (VAL), Resolve (RES), Insight (INS), and Charisma (CHA). Each of these Primary Attributes are rated in Supermetric Points (SP). SP are logarithmic; each additional one SP has a value equal to double the amount of the previous SP.  Ordinary people have 3 SPs in each of their Primary Attributes, and the most impressive humans typically have no more than 5 SP in any Primary Attribute. With 7 SPs of Agility, Aurora is four times more agile than an Olympic athlete. With 12 SPs of Charisma, Aurora is 500 times more magnetic and alluring than any ordinary person.
To the left of the Primary Attributes are Aurora's Secondary Attributes, which rate factors like Initiative, Passive Spotting Range, Height, Income, and more. With a Flight Speed of 14 SPs, Aurora can fly at Mach 24!
Below the Variable Attributes we list Aurora's Powers. Her most important Power is Agile Light Control. Light Control is a pre-defined Power Set that allows her to emulate many other powers.  (The rules let you build your own power sets if you want, yes!) "


The word Agile in front of Light Control is a modifier that changes how the power works. In this case, it means that Aurora uses her Light Control in conjunction with her Agility rather than her Insight. Between Powers, Power Sets, and Modifiers, there are infinite possibilities available to make virtually any character you can imagine.
Below Powers we've listed Aurora's Skills. Skills can be substituted for Primary Attributes for specific purposes. For instance, Aurora has 14 SPs of Aerial Combat. If she's the target of a ranged attack while she's flying, she can substitute her Aerial Combat score for her Agility score, making her much harder to hit.
Below the Primary Attributes, you can see Aurora's Perks and Drawbacks. Perks function similarly to Feats in a D20 RPG. Some of the most important Perks are the Combat Maneuvers, which allow you to trade damage for accuracy and vice versa. Aurora's got two Combat Maneuvers as well as a host of other Perks related to her status as a celebrity member of the elite Star-Spangled Squadron.
Aurora has a number of minor Drawbacks such as her Code of Honor ("always be fabulous") as well as one very serious Drawback called a Vulnerable State. A Vulnerable State models all the situations that can result in heroes becoming weaker or losing their powers. Exposed to meteorites from your homeworld? Caught out of your powered armor? Forgot to recharge your power ring? Not angry enough to turn green? All modeled with Vulnerable State. Aurora's Vulnerable State is that all of her powers are based on her egoistic desire to be a star; if she's ever reduced to 0 Determination, she gets depressed, loses her superpowers, and acquires a host of flaws.
Speaking of Determination, that's one of the game's Variable Attributes. The other one is Health, and both are listed near the top of the sheet. These are like Hit Points in a D20 Game. Unlike the other Attributes, Variable Attributes aren't rated in SP, just in raw numbers, so that when you deal and take damage it's all scaled correctly.
As for how the game itself works, it's so easy even a 200-CP ordinary human can play it! Anytime you want to make an Action, you choose your Action Value (AV) and then subtract the Difficulty Value (DV) to yield a Resolution Value (RV). You then roll 1d100 on the Challenge Action Resolution Table, or CHART, to see your Color Result. The CHART is carefully structured so that the expected values for any AV versus any RV are exactly what they ought to be, given the logarithmic nature of the Attributes.  (It's pretty slick if you like math and we'll update on this in more detail later.)


Let's simulate Aurora shooting a Thermal Blast at the blindsighted assassin Helen Killer. Down at the bottom of her sheet, we've listed Aurora's Attacks. Each Attack has an Action Value and a Base Damage. If Aurora fires a Thermal Blast at Helen Killer, her AV for the Attack is 14 SPs and her Base Damage is 256. Her DV for the Attack is Helen's Combat Sense, which happens to be 13 SPs. That gives Aurora an RV of 14 - 13 = +1 on the CHART. Let's say her player rolls a 32. Scanning across the "1" row of the RV (Attack) column, we see that 32 falls into the Yellow range, so Aurora has scored a Yellow result on her Attack.
When you score a Green result when making an Attack, you deal Base Damage, while Yellow, Orange, and Red results increase damage by a factor of 2, 4, or 8. Since Aurora scored a Yellow result she deals 512 points of Damage to Helen Killer. Helen now gets to  apply Protection like Forcefield or Invulnerability, then Roll With the Attack to reduce Damage in exchange for taking on various Conditions like "Dazed" or "Staggered"." 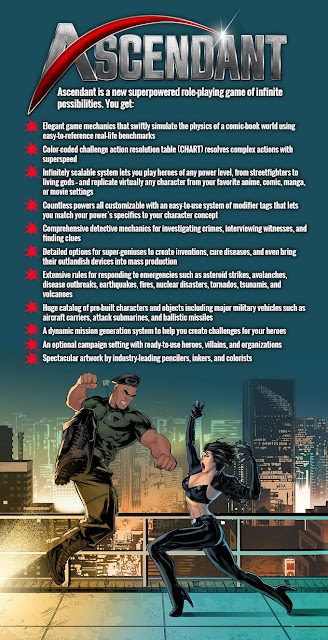 So basically what the Ascendant Rpg is doing is bringing the solid adventure background of Bronze Age & Silver Age comics through the extreme lens of today's headlines but warped by the production values of Pulp & solid comic book ideals. Do I think its good?! Yes I do because it takes Ascendant into a level of comic book super heroics that I think that has been missing from the rpg market place for awhile now! Would I actually play this & support it? Yes! Wanna read more on this exciting development in super hero rpging? Go right over to the link below
SUPPORT THE KICKSTARTER HERE!
Posted by Needles at 8:27 PM