The crew of the U.S.S Leonardo a DY 1000 deep salvage ship  was able to solve a bit of the mystery of the Orion class Space plane that they were doing  salvage work on from  last week's Stars Without Number Beta Max Black Edition game mission. They were able to defuse the Romulan A.I. mine after several tense rounds of rolling and skill checks. Those things are insidious and left a bad taste in the crew's collective mouths. They destroyed the thing after rolling, checking, and using several robotic drones to explode the antimatter horror several light years away from the plane.
The crew found several items aboard that including the data core of the  A.I. P.A.L. computer system.

The crew of plane had encountered something massive in its travels and gotten sucked into the hyper space wake of this massive object or object's gravity well. The crew of the plane had a close encounter with a group of alien humanoids that the crew of the Leonardo had encountered before. A quick check of the sleep pods and several items found on board including an energy clip from a heavy stunner had confirmed the worst fears of the adventurers. The crew of plane had encountered a Darian generational factory ship(more information on these people right overHERE ), the Darians are a tech level four race of ancient astronauts that the salvage crew had encountered two years ago. They barely escaped the eternal race of semi immortal aliens with their lives. This particular ship and the Leonardo have a history. This factory ship is part of a ghost fleet that the Lemuria is the head of. The crew turned the Orion plane over to the Talon system Travel Authority and then sent word out to meet up with their mother salvage ship. The party communicated with primary ship via FTL communication and set up a meeting point in a neutral trading system.
The Leonardo docked with their salvage partners and began to follow the last known coordinates of the Darian factory ship and the ghost fleet. It took the better part of seven months game time to reach the dimensional universe where the fleet was. The party of adventurers approached the heavily shielded Darian factory ship and heard the familiar transmission from the last time. 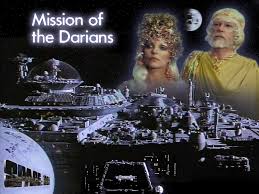 ‘Emergency...emergency...this is the commander of the spaceship Daria. A major catastrophe has occurred..'

The party's resident computer hacker  began the data deck cyber process to the carrier wave just below the transmission and gained control of the shields and a  hanger aboard the ship. The crew opened just enough of a hole in the shield to sneak in. After a few tense moments they found themselves aboard. A tractor beam slowly automatically pulled them into a massive hanger filled with hundreds of relic ships from all kinds of eras all within the cotton candy glow of the artificial gravity dry docks.
There were several Eagle Transports, a flying saucer or two, several Colonial colony transport ships, and hundred other ships all within the weird docking station. Many of the ships were in various states of disrepair and had missing parts or systems. The whole scene looked like some obscene high technological junk yard. The party hacked into the A.I. for this hanger to get a lay of the land and sell exactly where their 'old friends' were. Last time the Darians had tried to have the party processed in the food recycle systems.
Here's a small selection of some of the technological baubles that the PC's found whist examining the hanger.


The party has managed secure the temple computer complex for this level of the ship. The A.I. is running on minimum power, and might have had a nervous break down, the power is spotty at best, and the party's engineer is going to be very busy. The party fought a running pitched battle with a group of space parasites and minor energy leeches. But for the most part they've only just arrived and need to access the situation on board the Darian ship.
More coming up!