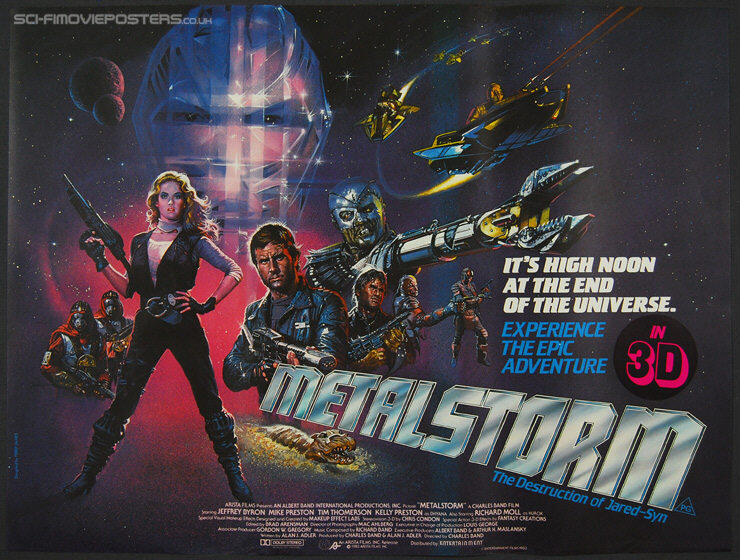 The Plot  according to Wiki:
The movie portrays the story of a space ranger named Dogen (played by Jeffrey Byron), who is in search of an intergalactic criminal with supernatural powers named Jared-Syn (played by Michael Preston). He has tracked this individual to a desert planet called Lemuria. The planet's human population lives in scattered mining towns, gathering valuable crystals which seem to be the basis for their technology and economy. Syn has posed as the leader of a strange group of nomadic humanoids called the "One Eyes" – so named because they symbolically gouge out one of their eyes – who are descendants of a vanished culture called the Cyclopians. The territorial nomads have begun a holy war to drive the human miners from their lands. Syn has instigated this crusade, but Dogen knows that Syn's plan is really to enslave them all and seeks to stop him at all cost. Syn equips his nomads with strange red crystals that drain the life out of touched victims. Dogen searches Lemuria's wastelands for Syn's camp, traveling in an armored vehicle which looks like a road-warrioresque SUV.

The movie begins with Dogen coming under attack by a "skybike", (a one-man, open-cockpit flying machine), piloted by a nomad. Dogen manages to shoot down the bike and finds one of Syn's crystals on the pilot's body. Carved into the crystal is a symbol of a dead tree. Dogen next finds a murdered prospector, whose young daughter Dhyana (played by Kelly Preston) witnessed his death at the hands of Baal (played by R. David Smith), Jared Syn's half-cyborg son. Baal sprayed the man with a strange green liquid that sent him into a nightmarish dream-state, in which Syn appeared and executed him with a crystal. Dogen convinces Dhyana that it's his mission to find Syn and she joins him on his quest. 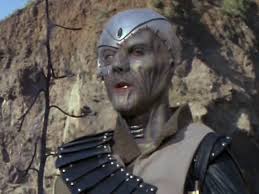 Dhyana takes Dogen to a man named Zax (played by Marty Zagon) who tests the crystal and identifies it as a lifeforce storage device. Dhyana recalls a tale of the ancient Cyclopians who once used such devices and says the only power against it is a magic mask located in their lost city. Zax confirms the tale and tells Dogen to find a prospector named Rhodes who lives in the nearby mining town of Zhor.

Dogen and Dhyana head to Zhor, but along the way they are attacked by a group of vehicles driven by the nomads and commanded by Baal. Dogen is forced to stop at a road block where Baal sprays him with the green liquid and he becomes paralyzed. Dhyana manages to drive the nomads off and cares for Dogen who slips into the dream world and finds Syn and Baal looming over him. Syn tries to pull Dogen away from Dhyana, but their will is too strong to break. Dogen awakes from the dream but Dhyana is suddenly teleported away and finds herself before Syn in his lair. In her place, a summoned monster appears before Dogen and fires electric bolts at him. Dogen uses water to defeat the creature which shorts out and vanishes.
Dogen then arrives in Zhor and finds Rhodes (played by Tim Thomerson), a washed-up soldier, drinking in a bar. Rhodes denies the lost city's existence and refuses to get involved. Dogen leaves but comes across a group of miners beating up a captured nomad soldier. When Dogen runs to help him the miners turn hostile and a shootout ensues. Dogen is out-gunned until Rhodes helps him and defeats the miners. 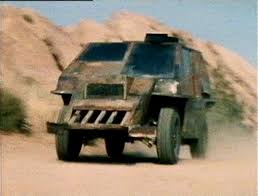 Rhodes reluctantly agrees to help Dogen and the two head out driving deep into Cyclopian territory where they come to the lost city. There, Dogen locates an ominous statue of a seated being with a single eye and finds the crystal mask just as the legend foretold. The two are then attacked by snake-like creatures but manage to get away until they are accosted by a group of nomad warriors. Their intimidating leader, Hurok (played by Richard Moll), grabs the mask from Dogen and accuses them of trespassing on their sacred land – a crime punishable by death. Rhodes points out that the nomad law states that a warrior can fight for his freedom so Dogen is put into a dueling pit with Hurok. Dogen fights Hurok, but manages to defeat him and honorably spares his life. Hurok accepts Dogen as a friend and lets him go free.
Meanwhile, Dhyana is still being held in Syn's lair. Syn takes her before a massive crystal and forces her touch it. It begins to glow and emits a sounds like the suffering of hundreds of beings. Syn tells her that the crystal gets its power from the souls he captures including that of her father. Dhyana is disgusted and says her warrior will come for her.
Elsewhere, Dogen and Rhodes conduct a drive-by shooting on Baal's encampment and a chase ensues. Dogen makes good their escape and stops to rest at a lake. There, Dogen looks over the mask. Placing it over his face, he finds himself in the dream world with a burning tree. In his hand he finds an axe and hacks into the tree. The tree moans like the crystal in Syn's camp and trickles a stream of blood. Dogen pulls the mask off his face finding himself back with Rhodes but suddenly, the two are attacked again by Baal. Baal rushes up extending his robotic arm to spray Dogen, but Rhodes pushes him out of the way. Rhodes is knocked out and Dogen struggles with Baal managing to rip the robotic limb from his shoulder. Baal cries out in agony and runs away. Dogen follows the trail of green fluid that is leaking from Baal's severed limb which leads him to Syn's camp. He sees the nomads gathered around Syn and makes his way through the crowd. Hurok is also present and steps forward to meet his friend.

Syn announces to his people that the warrior is here to stop them from their goals, but Dogen states that he has only come for Syn. Syn orders Hurok to kill Dogen, but Hurok refuses and demands that Dogen be allowed to speak. Dogen turns to the crowd telling the nomads that Syn is a liar and that he wants their land so they can serve him as slaves. The crowd begins to protest with anger, but Syn shouts that they are all too late. He activates the crystal and summons forth a blast of energy which stuns the crowd. Syn fires a more blasts at Dogen but he deflects it with the mask. Baal grabs the mask and it shatters on the ground. Hurok then grabs Baal and stabs him in the chest with a knife. Syn shouts in despair as his son dies then suddenly he disappears, teleporting away.
The sound of a skybike alerts Dogen as he sees Syn fly off. He jumps on another bike to pursue. Dogen chases Syn over the mountains and into the desert, but Syn casts another spell that opens an energy portal and he gets away. Dogen returns to the nomad camp finding Dhyana safe with Hurok. Dogen says Syn has escaped where Hurok states that he may return in another place and time. Dogen swears that wherever he goes, he'll be waiting for him. Dogen then fires his pistol and destroys Syn's soul crystal. Dogen and Dhyana leave the camp and walk down a road on foot but they soon encounter Rhodes in Dogen's truck who picks them up and takes them into town.

Metalstorm: The Destruction of Jared-Syn is one of my post apocalyptic go to interstellar movie from hell. This movie is a cult favorite. Its got a bit of everything. Let's start at the top. The space ranger is a perfect foil for the type of PC that you can find on blogs like Exonauts. Right over here for the Space Ranger Class HERE Lumeria
Earth Type Planet
Shorter Day cycle
The  desert planet called Lemuria. The planet's human population lives in scattered mining towns, gathering valuable crystals which seem to be the basis for their technology and economy. Syn has posed as the leader of a strange group of nomadic humanoids called the "One Eyes" – so named because they symbolically gouge out one of their eyes – who are descendants of a vanished culture called the Cyclopians. The territorial nomads have begun a holy war to drive the human miners from their lands.
The mega dungeons of the Cyclopians are scattered throughout the planet. Its the type of planet that calls all types. The desperate, the stupid, and adventurers all rage over the face of the planet. Jared-Syn is the type of cult leader that one finds in the Outer Reaches. Charismatic, totally insane, and complete megalomaniac. He's used the planet Lumeria's rich psychic history for his own profit.  He's divided the human colonists from the original Cyclopian territory. The Cyclopians are fighters and warrior tribes who roam the wastelands of their once fertile world.

Most are first and second level fighters who use a wide variety of slug throwers or energy weapons. The race ritualistically laser burns off  their left eye in order to develop the inner eye of  the mind. The modern race usually has some minor telepathic or telekinetic abilities.
The ancient Cyclopians developed psychic crystal technology which could imprint and store a human or near human soul within it.

Jared-Syn himself is a 9th level psychic or mutant from an alternative universe who draws his power from alternative subspace pocket dimensions. Given the right number of human or near human souls. Syn can teleport, open dimension gates, charm person,  use phantasmal force, and a number of abilities up to three times per day. Syn is wanted in over a dozen systems. He also has access to ancient Cyclopian technology. 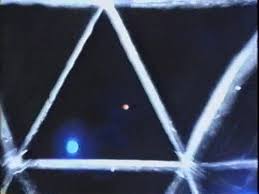 Baal's systems are a result of Syn's research into the ancient Cyclopians cybernetic systems.

His spray contact poison will send a person into a complete nightmare phantasm unless a successful save is made.
Lumeria makes an excellent starting point for a number of campaigns. The planet is unique with its bounty of psychic crystals providing the basis for its its economy.

Towns are temporary affairs at best with great psychic and dimensional storms that rip across the face of the planet. The towns often follow mine encampments that follow rich veins of the crystals.

Many scouting vehicles  are left over from the heydays of this incredible planet which is the only one in the entire universe .These 4 to 10 hit point machines are built with atomic power planets and move with the speed of angry beasts. They have an armor class of 7 or lower. These crates have a  top speed of 120  MPH. 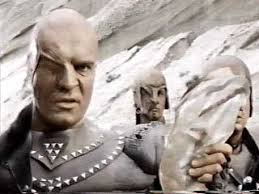 Psychic crystals may store up to 3 full human souls or 1d4 psychic powers within the delicate matrices. The crystal may be flawed or cracked however there is only a 40% chance of the crystal storing a complete soul. Flawed crystals have a 5 % chance of storing a planar demon within.
The struggle upon the face of the planet Lumeria continues. Syn is still at large plotting his revenge. The tribes are still at war.
Happy Gaming. You can find Metal Storm on you tube or at your local video store.
Posted by Needles at 11:46 PM