Review of Iceblood Oulanders By James Axler aka Mark Ellis

According To Mark Ellis's Facebook post:
"Mike Herring's cover to my seventh OUTLANDERS novel, ICEBLOOD...the last quarter of it set in Tibet, this is a pivotal book in the storyline. It was also (I learned much later) Gold Eagle's best-selling book of that year. In fact it was reprinted in an oversized volume entitled AFTERMATH...which just happened to be one of the early alternate titles for the OUTLANDERS series."
So I went back and reread this book.
The plot according to Amazon: "Kane and his companions race to find a piece of the Chintamanti Stone, which they believe to have power over the collective mind of the evil Archons. Their journey sees them foiled by a Russian mystic named Zakat in Manhattan, and there is another dangerous encounter waiting for them in the Kun Lun mountains of China. One man's quest for power unleashes a cataclysm in America's wastelands." 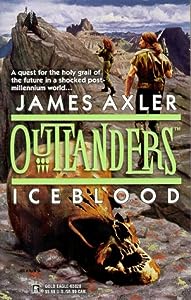 This book reared its head way back in the halcyon days of 1998 and its one of the most pivotal books in the Outlanders series. We finally start getting into the background of  the Archon Directorate who were so superior to us and had conquered humanity
The answers are not what I was expecting at all. Its only recently that I've gone back to Iceblood and its environs. A huge number of questions have been answered regarding their origin, what happened to them, and about the background of some of the major character in Outlanders.
The action here is very fast paced and the writing is a step up from the usual "Men's Adventure" stuff we often see hitting book shelves.
This beast clocks in at 352 pages.
For gaming this is a great book because of its locations and there is a lot going on with the party of characters. We get some amazing ideas in this book for the mega dungeon ruins of New York city which are often featured in Deathlands and Outlanders sbooks. Some of the ideas here could be used in any post apocalyptic landscape and those are great ideas.
The book delves deeper into the Deathlands/Outlanders universes and as such are a not so good starting point unless your into the series. Gaming wise there are metric ton of ideas between the covers if your willing to divorce yourself of the characters and make use of the concepts.
Iceblood is about four out of five stars and is only .01 cent over at Amazon right HERE
You can find out a ton more information about the series right HERE
And a great resource is Mark Ellis page right HERE
Posted by Needles at 12:53 AM