There's a great game with a d6 base system that is mostly forgotten except but a few of us diehard Nexans. The game is called Nexus The Infinite City. Wiki had this to say about it - Nexus: the Infinite City takes place in a city called Nexus. Player characters can fill many roles within the city, from violent enforcers to capitalistic thirds. The city itself is made of chunks of other cities from many worlds and dimensions. Some are cut off entirely from their home reality, while others have only a few connections to Nexus. Interfaces connect the different realities of Nexus, and frequently phase in and out. As a result, many Nexans have irregular and erratic lives.
The primary core of Nexus play is Angel City, a Los Angeles separated from Earth in 1993 and wholly subsumed into Nexus. Shortly after its incorporation, the Los Angeles government collapsed. Los Angeles was then renamed Angel City, and has since been carved up between numerous factions and powers within Nexus.
Each reality follows its own natural laws of physics. Some technology works in certain realities, and magic is particular to some realities as well.
However when the game came out all I could think of  was -
Grim Jack The Role Playing Game!
One of the stars of this series was the pan dimensional city of Cynosure -
Cynosure is a fictional pan-dimensional city that exists within the First Comics multiverse. It is described as floating in a "bubble" in the "pan-dimensional vortex." Because of its unique situation, Cynosure is an important center of multi-versal commerce and much of the city's government is geared toward maintaining favorable trading conditions.
The real star of GrimJack wasn't just its mercenary with an attitude but the city of Cynosure which is according to wiki again -
Different zones of the city operate under different physical laws because of the proximity of other dimensions. Guns and other technology work in some parts of the city and not others. Similarly, magic is operable some places and not others. Swords generally work everywhere. Different dimensions variously move in and out of phase with Cynosure, regularly in some instances and randomly in others. Occasionally dimensions will seemingly exist entirely within the confines of Cynosure, as for example the so-called "snowball dimensions" which roam throughout the city, or at "Infinity Lanes," a bowling alley in which each lane is a separate dimension.
Perhaps the most noted resident of Cynosure is John Gaunt, also known as Grimjack. His fate is uniquely tied to that of the city, as he is doomed to be reincarnated for as long as the city exists. This doom came about when Gaunt voluntarily walked out of Heaven to save the life of a friend who, if he were to die, would have been condemned forever to Hell. It is through Grimjack's experiences during two of his incarnations (Gaunt and James Twilley) that much of what is known about Cynosure was revealed. 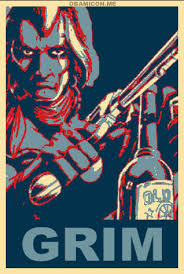 Nexus The System - The game was defined in really broad strokes. Attributes were split between Mind, Body, & Reflexes.Skills add to a character's capability in an area. Powers are broadly defined and allow for characters to have diverse power styles; the game includes three such systems, Nexan Sorcery, Rhyming Magic, and Psychic Powers. A list of modifiers and sample spells allows players to create more powers and frameworks.
If you prefer game mechanics from a favorite RPG system, Nexus has conversion notes for several popular systems including GURPS, Hero, Storyteller, etc.
Personal opinion - I love this game & ran a campaign with various players for over 4 years. The science works here & magic across the street thing gives the Dungeon Master much lee way.
Is this GrimJack The Role Playing Game? Short answer - No. Its Cynosure the rpg & the real stars of the game is the city of Nexus itself. There are locations within locations here that scream for use. There are various venues for the game.
The other thing about the game is that this was published  in 1994 by Daedalus Games. The game is self-contained in a single 208 page volume. Everything you need is right there. The entire package is self contained in all 208 pages. So it might need to be updated or not depending on your desires for a campaign.
Nexus works best as sort of a home base for a multi-dimensional "genre hopping" type RPG game. The place fairly screams Feng Shui which is really is the son of this system.
The combat system is also point based.Each action takes off some of your action points for the round until everyone has no action points left and a new round occurs. 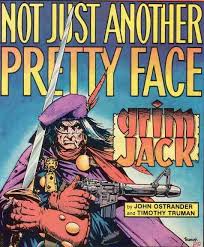 Did I mention the game rocks & it plays fast. Robin Laws did an excellent job with it. The game is suited to an urban environment as much as anything. Think Fafhrd and the Gray Mouser here & their urban based adventures. Seriously this is really their turf. Corrupt city officials, Demon Cults, & all other types of nastiness. In fact think Raymond Chandler with monsters.
There was a supplement for the game titled Nexus Life. The book was odd in that it was written in the style of an actual magazine from the city. Sprinkled throughout were all sorts of new gadgets, places, characters, etc. but written in story. I find the book recently at a garage sale for .50 cents. Its worth finding it.
The cover looks like this!
Nexus & The OSR
The game is really primed for running any style of adventure really. Personally I'd use the setting with any of Goblinoid Games family of games. Everything is there to rock & roll. Finding a copy of the game might be a tad more difficult but with some luck on flea bay or Noble Knight you might find a copy!
In closing its the sort of game that comes along once every ten years. Grab it, some friends & go play!
Nexus Links
Savage Worlds Nexus Rules
Home Brew Rules
Introduction Adventure By Robin Laws
Character Conversion To Nexus
All links are fan based & non for profit in nature, All GrimJack Artwork Is Copyrighted To Tim Truman, I have no money & this is merely the work of a demented fan of everything above!