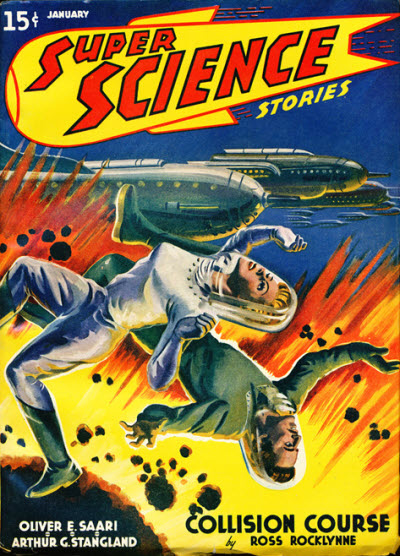 This novelette  first appeared  in the January 1941 issue of Super Science Stories magazine.The story would also make an excellent mid level adventure for a party on Mars. Its a story of survival on a section of Mars that is very unforgiving to a party of
Under The Sand Seas was Oliver E.Saari's creation and a pretty damn quick yarn and a good one at that.
Blurb: "Six hundred miles of devouring red desert lay between them and the nearest city -- and the bust of a long-dead Martian smiled with the knowledge that could get them there!"


There's some great little hidden pieces in the background of the story which can be used as the basis for further adventures in the  Sand Seas territories.


I love that the Sand Seas is a nice little wasteland with hints of deep and nasty mysteries lurking under its pulp sand.


Who was Oliver E. Saari?
Oliver E. (Ollie) Saari was a fan and SF writer of the 1930s-1940s. He published in most of the early prozines, including Astounding.
He was one of the founders (and first Director) of the Minneapolis SFL in 1936 and was later one of the leaders of the Minneapolis Fantasy Society. He attended several SF conventions in the 1940s-1950s (including the 1943 Michiconference and Centracon and at least one Worldcon). His auto was named the Sfnash and he was a member FAPA and of the would-be shadowy Order of Dagon.
He was awarded the First Fandom Hall of Fame (Posthumous) Award in 2011.
There is a lot more going on here in this story then simply meets the eye, everything from an ancient Martian scientist's treasure, to details on one of the most inhospitable realms on Mars.
Then there is the pulp adventuring party from the crash, everything in this story smells of the beginning of an adventure campaign.
This story has a bit to offer for an old school Martian campaign.
This story could easily take place during the post colonial Martian period of an Edgar Rice Burroughs style adventure.