Space Borne Chelonethida For Use With The Stars Without Number Rpg 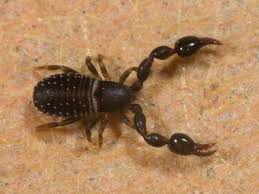 Flavius secured his line & something lashed out knocking him on the side of his helmet. The thing moved on eight legs carrying it quickly as its bio jets arched the creature the sized of a small escape pod into his view. The thing's claws snapped once and then twice with no sound at all. The body cycled through the weird colours of the spectrum signaling its brethren.
By the time he was on his feet and ready with the laser a light telepathic presence brushed his own mind. His clutch brother had already gotten the intruder within his own pincers. His own spray of bio acid from his weapons system was quickly doing its work. Onyx flared through several dozen threat combinations even as the attacker melted and his brother intruders moved in.

Space Borne Chelonethida
Number Appearing: 1d4
Armor Class :7
Hit Dice: 4
Attack Bonus : +6
Damage: 1d8 Pincer, Bio Acid 1d6,Bite 1d6
Saving Throw : 13+
Movement : 30 '
Morale: 12
When man ascended into space after the Atomic Wars in to space he brought with him many of the genetic legacies of Old Earth. The Pseudoscorpions were one such creature and are generally beneficial to humans. Yet they are both weapon, companion, and hazard as well. The Space Borne Chelonethida can be found throughout interstellar space


The original configuration of the species :
A pseudoscorpion has eight legs with five to seven segments; the number of fused segments is used to distinguish families and genera. They have two very long pedipalps with palpalchelae (pincers) which strongly resemble the pincers found on a scorpion.
The pedipalps generally consist of an immobile "hand" and "finger", with a separate movable finger controlled by an adductor muscle. A venom gland and duct are usually located in the mobile finger; the venom is used to capture and immobilize the pseudoscorpion's prey. During digestion, pseudoscorpions pour a mildly corrosive fluid over the prey, then ingest the liquefied remains. 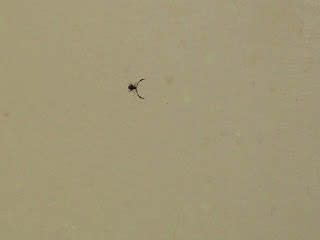 They are active in the warm stellar bodies of the cosmos, they sometimes hibernate  in silken/artificial  cocoons when the cycle of activity of spacers is done. Smaller species live in debris and space wrecks. Some others are phagophiles, eating parasites in an example of cleaning symbiosis. Some species are phoretic. They may sometimes be found feeding on mites under the wing covers of certain space craft.
Certain peoples of the Holy Corporate Empire trained them and use these monsters in their unending war against the Mythos. Their pincers could rip a man apart in seconds. For all their bulk they could move fast. Very fast.
There are fourteen known variations of the beasts that have been used in "Circus Mechixmus" and thousands in the folds of the Empire.
The creatures use a line of sight telepathic link as well as a mild "Greater Link" that can extend up to one light year with their owners. They have a low to moderate intelligence rating but are considerably loyal to their owners. Some going to extremes to avenge the deaths of such.
More information about the original genetic stock can be found HERE.
Posted by Needles at 10:16 AM