Transformation: Takes Less  Then 1/2 a Round to Transform Between Modes The MZ-22 Maneuver Slave GR-2 Garand makes a perfect scout, commando, & forward observer for a unit. Capable of quick decisive action this unit is not without its defense capabilities. Armed with either a heavy machine gun or light laser this unit is capable of packing a punch.

This is a level 7 based military design (level 4 pretech) & therefore not available on the open market. The transformation ability enables the MZ-22 Maneuver Slave GR-2 Garand to fulfill a number of roles. The weapon system is low cost & can easily be manufactured in any level 4 pretech factory. This enables the design to be used by many colonies, armies, etc. There is a psychic upgrade available for the Maneuver Slave system allowing a complete psychic neural net to be installed. This enables instantaneous communication with any A.I.s within a 2k range.

The classic design & timeless performance of the mecha allows it to be used with A.I.s, light infantry, & a number of support rolls.

The Antigrav nodes are supported by a series of  external jets for fantastic maneuvering capabilities. The A.I access allows the pilot's internal & external data to be collected & collated in real time giving his commander an added advantage on the battlefield. MZ-22 Maneuver Slave GR-2 Garand For Human Space Empires
Frequency: Very RareNo. Enc.: 1d6 Alignment: Neutral or Allied Intelligence: As Pilot Size: Large (9' tall)Move: 90'(30') per segment Armor Class: 3Hit Dice: 6+2Attacks: 3Damage: 2d8/1d8Save: W6Morale: As Pilot Hoard Class:  Special: +4 on Saves vs. mind affecting PSY Powers, Darkvision, Experience: 300
Developed by his most Grand weapon smith Hiroyuki Hoshiyama. The military were developing new weapons underground to avoid A.I. detection during the Atomic Wars.   They would have cleared "Level 6" just before the bombs dropped. The design has been seen time & again from world to world where the touch of the A.I.s & Cymeks have been. These weapon systems are often seen on worlds which are under their dominion.

The MZ-22 Maneuver Slave GR-2 Garand is a Maneuver Slave system & carries a number of relic technologies within it . Including Antigravity nodes which add +2 to all combat rolls. A complete portable positronic neutral network hook up  which adds +1 to all computer related rolls. 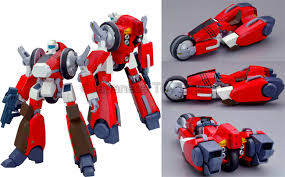 The Maneuver Slave system is capable of switching between vehicle modes in 1/2 a combat segment due to the incredible relic technology found within it.

These highly prized systems are often found within the hoards of grand A.I. entities or aboard lost warships. They easily are a match for many lesser mecha & robots.