Bow down: I am the emperor of dreams;


I crown me with the million-colored sun


Of secret worlds incredible, and take
Their trailing skies for vestment when I soar,
Throned on the mounting zenith, and illume
The spaceward-flown horizons infinite.


The Hashish Eater -or- the Apocalypse of Evil 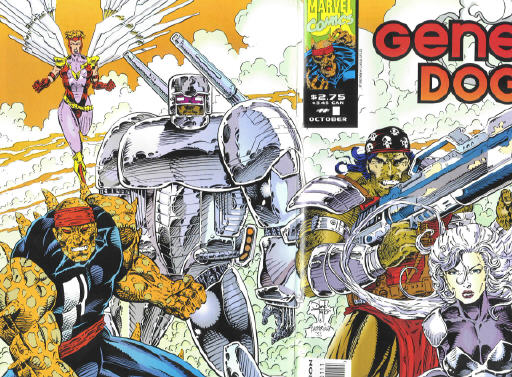 Gene Dogs is exactly the sort of series that 25 cent bins are made from in comic shops. The title had potential during a time when series like this was sort of fresh & new. I've been rereading various lines in the Marvel U.K. & I've come to this startling conclusion.
Gene Dogs is the perfect starting point for another style of merc campaign. These guys are transformed soldiers who get squeezed by both government & Mystech.
Originally members of an elite counter-terrorism squad known as Team Omega, five dying soldiers become the Gene Dogs after an experimental medical process saves their lives by modifying their DNA, a process which also grants them superhuman abilities. After their transformation, the squad continue to work as a team, now employed by a secret new European defense organization, S.T.O.R.M.


The characters are strangely mutated human beings with some of the genes of animals & other. Look this is a comic book so go with it.
Here's how the team shapes up :

The Gene Dogs consist of: 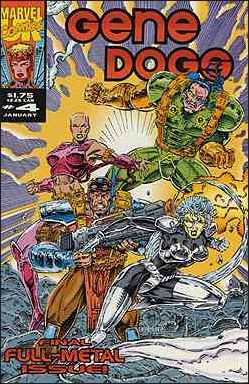 Gene Dogs were meant to be the U.K.  X- men only sales didn't work out & the issues went the way of the dinosaur
The basic plot went something like this :
The soldiers who would come to be called the Gene Dogs were originally part of an elite counter-terrorist squad called Team Omega. During a mission in the Congo, they were attacked by an unknown creature and infected with a deadly virus. In order to save their lives, they were spliced with animal DNA, as well as receiving bio-wetware chips in the cerebral cortex to enhance their abilities


The Gene Dogs Concept & The OSR


The Gene Dog concept sounds like a winner. Take your favorite soldier & splice him or her into a mutate.These are the good guys as well. The concept is sound & they don't have the Xmen backing issue! These guys are the under dog. They don't have a fancy mansion, they kill, & the still aren't going to be making it back all in one piece! These guys aren't Wolverine! Not even close! These are the guys who might mop up after the Xmen get through with a group like A.I.M.
Where will we get the mutations from? Well I can hear the shout of Mutant Future now! UMm the issue I have with Mutant Future is the character hit points. No I'd want something that makes the heroes a bit more disposable That's got everything I need weapons, mutations, wolfoids, ermm & all kinds of interesting bits that I can use. For those unique weapons & psi  I will be fading back to Carcosa.
What you end up with is a tightly packaged government back group. The same dimensional formula can be applied to this group as the Warheads & the whole thing comes packed with expendable agents, flashy powers, & some cool new ideas.
Storm can be found  Here Storm
The Gene Dogs Here
They're opposite  Mystech number Q7 Here
Hurricane Here
Another possible employer if the S.W.O.R.D doesn't work out Here
Note : Otomo is head of a wealthy and powerful corporation, and has access to advanced technology from alternate dimensions. His business is the leading rival of Mys-Tech in space exploration, colonization, and terra-forming.
.
Metamorphosis Alpha could also be used as a possible destination for your dimensional hopping mercs.  I have always liked the idea of the space ships from Metamorphosis Alpha, DA3 and Expedition to Barrier Peaks to be from the same civilization. There might be some items that your Gene Dogs unit are sent to recover!  The idea isn't mine but was taken from my friend Harvard Blackmoor!

Stay Tuned Tomorrow we'll be covering Genetixs for a dive deep into the Gene pool of  Marvel U.K.
Note: I'm still using Crypts & Things because the Gene Dogs are basically human with some nifty mutate powers & some bio chips in their heads.