"Blackmoor is beset!"
On every side the storm clouds gather. To south and east, the Great Empire of Thonia plots to end Blackmoor's independence and reclaim its lost province. To the west, the implacable Afridhi are on the move. To the north, the evil Egg of Coot prepares to cross the thundering sea and once again bring fire and sword into the heart of the small kingdom. Beyond the realm of the Egg, the hated Skandaharian Raiders are building longships and preparing to fall upon Blackmoor's unprotected coast while its tiny army turns to meet these other threats.
Into this time of black despair, there steps a band of adventurers who clutch strange swords and wear most curious armor - and who claim that Blackmoor sank beneath the ice 3,000 years ago!" 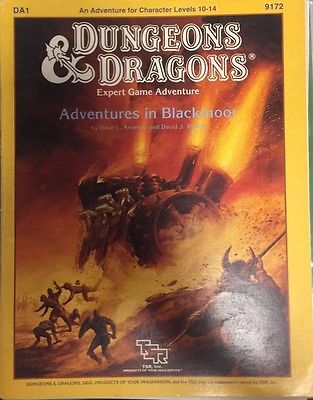 Years & years  ago I picked up DA2 Temple of the Frog before DA1 Adventures in Blackmoor by Dave L. Arneson and David J. Ritchie.
"Adventures in Blackmoor is a 64-page[1] Dungeons & Dragons fantasy role-playing game adventure, designed to be compatible with the Dungeons & Dragons Expert Set."
The PC's travel back in time three thousand years back to the time of Mystara ancient past into the time of Blackmoor. "The PC's are transported from their "modern" time to the time of Blackmoor and must rescue King Uther from The Prison Out of Time"
Anyone that knows me as a dungeon master knows that I love dimension & plane hopping adventure setting locations & the inn from Adventures in Blackmoor is a brilliant adventure plot device. But Mystara & Blackmoor should have have been separate adventure settings each unto their own rights. Yet they could have been connected using this series of adventures. But instead the whole adventure line was cancelled.
Anyone with this adventure & Judge's Guild's First Fantasy Campaign by David Arneson have all of the tools the dungeon master  needs to run a complete campaign in their own right. 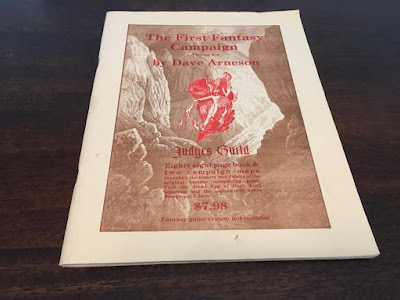 How?! By using the fully developed NPC's & information in DA1 Adventures in Blackmoor. There's just enough to flesh out swaths of the this hybrid Blackmoor.
"The final 20 pages of the adventure give a description of Blackmoor, and detail 38 prominent NPCs from the setting.[3] The module includes campaign setting material on Blackmoor and the Thonian Empire."
This is a very different Blackmoor then the free wheeling Blackmoor described in the First Fantasy Campaign. Locations are fully fleshed out whole cloth, NPC's  have strong motivations & back history, the empires have static histories of the past that have further effects on the 'now'.
It's less of an adventure than a primer into Blackmoor culture and intrigue.And this speaks somewhat of Blackmoor very different place within the Gygax Greyhawk box set. Blackmoor in Greyhawk is mirror reflection of the dark & forbidden secrets of the Blackmoor setting. A weird & twisted place of dark dreams & dangerous nightmares bubbling just below the surface.  But which is the 'true' Blackmoor?  I feel that each of these version of Blackmoor is but a representive of David Arneson's vision. 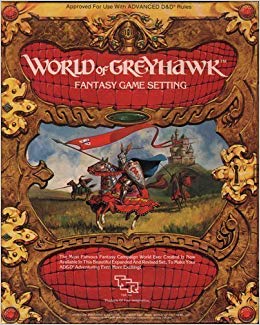 Now I've mentioned St.Stephen of the Rock but let me say again that he is one of Dungeons & Dragon's true evil madmen & should ever be under estimated. I've had two PC's back in '87 killed odd by the murderous bastard. His evil along with the Egg of Coot
infects everything within DA1 Adventures in Blackmoor this runs from David Arneson's original ideas & expansive  game play. David J. Ritchie codified those ideas & fleshed them out for DA1. The legacy of DA1 Adventures in Blackmoor is found on the table tops of those who continue to use this iconic campaign setting & its adventure. It also continues to speak to the incredible amount of work contributed to the hobby of table top gaming by David Arneson & his work for the creation of Dungeons & Dragons as a whole.
Next time we get into the deeper connections between Blackmoor & the Temple of the Frog, motivations for the Egg, more Greyhawk hooks, & the weirder aspects in Mystara
Posted by Needles at 11:31 PM