"Desolate and abandoned, the evil alchemist's mansion stands alone on the cliff, looking out towards the sea. Mysterious lights and ghostly hauntings have kept away the people of Saltmarsh, despite rumors of fabulous forgotten treasure. What is its sinister secret?"

So I'm looking ahead to putting down the PC's in a turn of the of the century alternative Earth  old school OSR hybrid of Adventurer, Conqueror, King's Barbarians of Barbarian Conquerors of Kanahu mixed in with Troll Lord Games Amazing Adventures firearms, modern equipment & more. The combination will be called Renegade Heroes, Tyrannical Conquerors, & Wasteland Kings! The first thing I'm going to do is to give Dave J. Browne with Don Turnbull's UK1 The Sinister Secret of Saltmarsh an upgrade to 1904 New York City's docks & sub urban villages. 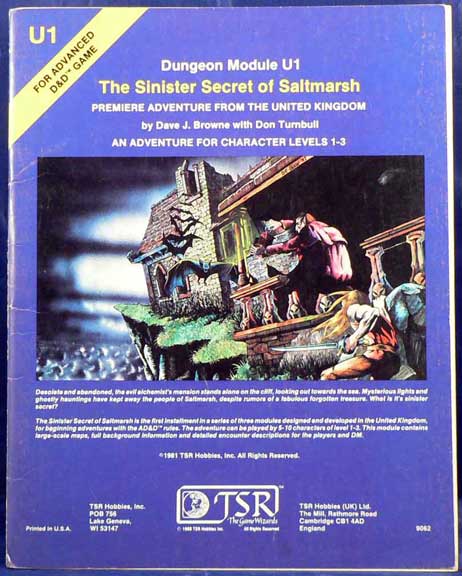 First thing that happens is that alchemist becomes a full blown undead & the illusionist becomes his cat's paw. Next the smugglers are perfect for the environs around Pre World War I  New York City harbor & fishing culture. Yes this is going to have a very Gangs of New York feel to it with super powers, magick, adventure & pulp elements.

The lowlifes & smugglers of the UK1 series can easily be modified to accommodate Lovecraftian elements.   Lovecraft's 1931 novella "The Shadow Over Innsmouth" makes a perfect case for Kou Toa being cousins of the Deep Ones. 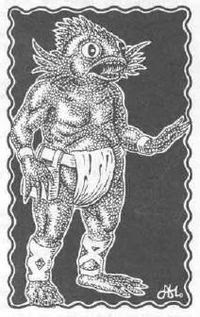 The lizard men are not the same faction as we've seen from N1 Against The Cult of the Reptile God. These are of a far more peaceful off shoot but still dangerous none the less. There have been reports of unknown lizard like creatures seen around the outskirts of New York City. This gives a perfect connection to the weirdness of N1 to hook up with U.K.1. Dave J. Browne with Don Turnbull's UK1 lizardmen are no less dangerous but N1 Against The Cult of the Reptile God lizardmen resemble the full blown slaves & servants of the Serpent Men. These nasty & rather  Lovcraftian cults of N1 Against The Cult of the Reptile God might be found in some of the back alleys of New York City stretching its coils & influence deep into New York State's back woods. This could be represented by the very Adult themed Obscene Serpent Religion by Rafael Chandler.

The war between the lizard men & Deep One Kou Toa is a very old one & the river traffic on the Hudson up points the one resource that's at steak here that's mankind itself! The very souls & bodies of mankind are up for grabs from the back rooms of power to the lowest river bottom captain everyone's got a hand in this pie.
So how does Dave J. Browne with Don Turnbull's UK1 The Sinister Secret of Saltmarsh enter domain play especially one of a pulp era? The PC's gain a dock side base & a ship if they play their cards right plus a ton of underworld contacts & more.  The rivers & byways of New York City's waters hold secrets from the 1890 Martian Invasion making navigating these areas very dangerous affairs. 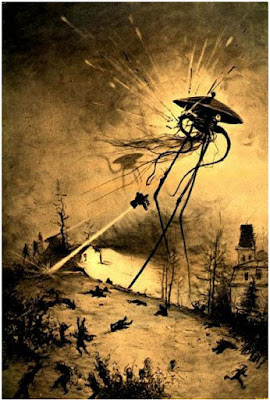