" In our veins was the chill of the ancient night of Time, with a premonition of the lentor of Lethe: over us, like invisible vampires, brooded the innumerous hours on their sable and unremoving pinions: the very skies were fraught with oppression, and we breathed beneath them as in a sepulcher, forever sealed with all its stagnancies of corruption and of darkness."
Clark Ashton Smith From The Crypts of Memory 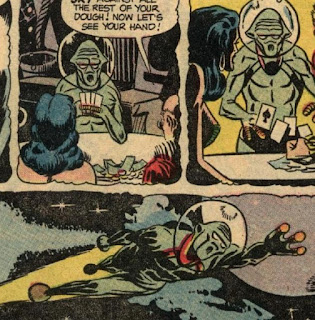 Ogu a dangerous alien entity from Space Adventures #11 (May-June 1954)
There are those trans cosmic entities that trade with the lesser beings of the 'Old Solar' system for amusement, profit, & see their role as cosmic jesters of the highest degrees. The humans & Hyperboreans around them see them as monsters or demons of the highest order. They wander across the face of the system causing mayhem and horror where they go.
These are the ultimate foreigners & visitors to our reality. These are strange, dangerous beings who are corrupt in every sense of the word want nothing more then to murder your PC's or worse.
These are the 'ascended ones', beings high up on the ladder of transcosmic existence who could be considered demons or worse in the grand scheme of the dimensional & planar underworld. 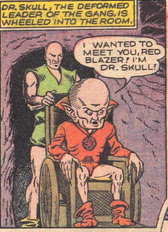 Many of these entities were once or are wizards of the highest orders who use a variety of magic and relic technologies to ascend to the higher realms. They often have access or have been corrupted by alien gods of the lowest orders. They often feel that they have passed beyond the norm of their species ruling over star systems or small other worldly demi Hell planes. Many have the minor powers of demons or other entities. They are immune to electricity, & poison. They take half damage from acid, cold, & fire never realizing that in actuality they have become vulnerable to clerics abilities of turning or rebuking. The elder sign can bar these beings entrance into our curved space time but only if done within a round or two of their teleporting into normal space time realm. Many are telepathic & have many demonic or chaotic traits including the ability to gate or summon demons. Many trans cosmic entities can only summon the most minor or common demons.Trans cosmic entities are often reluctant to use this power until in obvious peril or extreme circumstances.
Many of these entities often use humans or beings of our normal space time continuum as a part of their wares or  as parts of forbidden demonic technologies. 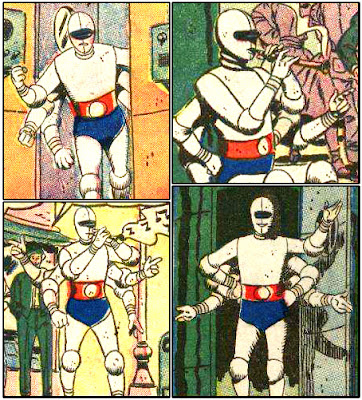 
It seems to me that I have lived alone—
Alone, as one that liveth in a dream:
As light on coldest marble, or the gleam
Of moons eternal on a land of stone,
The days have been to me. I have but known
The silence of Thulean lands extreme—
A silence all-attending and supreme
As is the sea's enormous monotone.
Upon the waste no palmed mirages are,
But strange chimeras roam the steely light,
And cold parhelia hang on hilt and scaur
Where flowers of frost alone have bloomed. . . . I crave
The friendly clasp of finite arms, to save
My spirit from the ravening Infinite.
Desolation  (1922)
by Clark Ashton Smith